On Sunday, some social media users in Nigeria circulated videos of an “airplane crash-landing” at an airport.
One of the videos also showed the emergency exit of passengers from the plane allegedly belonging to Garuda Indonesia, the country’s national airline.
The videos were widely shared on social media platforms including Twitter, Facebook and several YouTube channels, claiming the incident happened earlier in the month.
Garuda Indonesia’s crash landing is terrifying. pic.twitter.com/4VcM16b02Q
— Ms Nḓou (@Mavhungu_Ndou) January 9, 2022 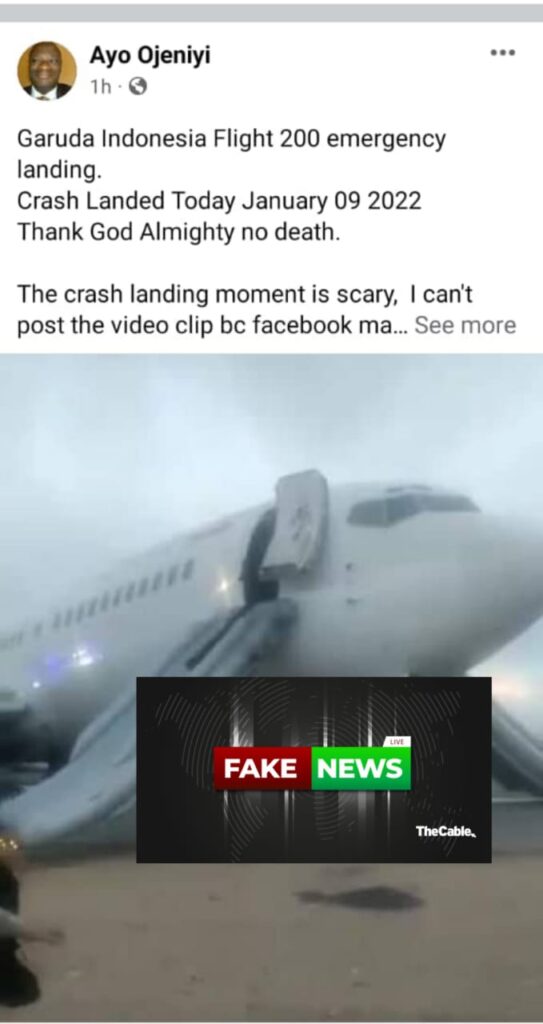 Isaac Fayose shared the video on his Facebook page with caption, “Wow. Plane crash landed. This is serious but thank God.” His post garnered over 100 comments, 549 shares and 18,000 views. 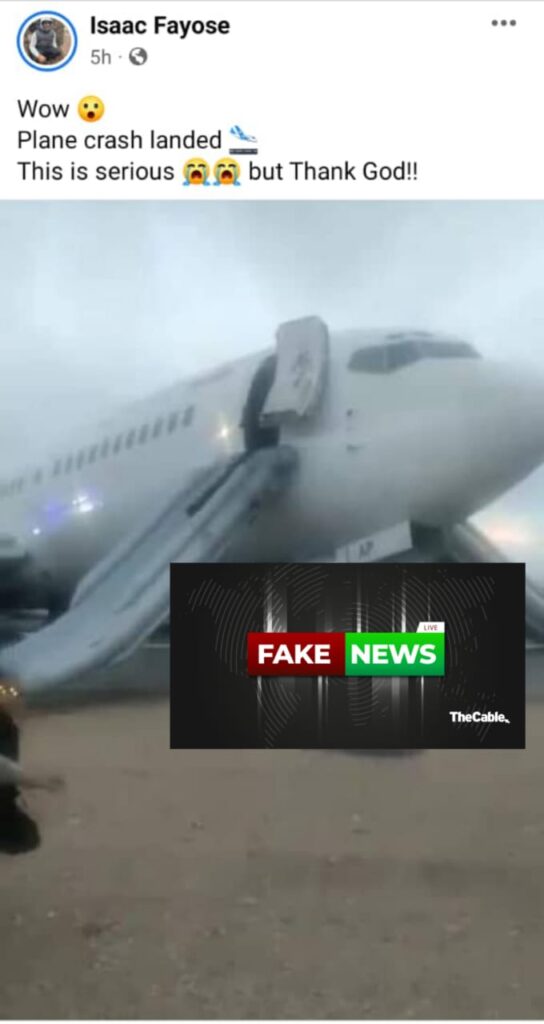 Shukree Abdullah also wrote on his Facebook page, “This is airplane (Garuda, Indonesia) was crashed land today (7.1.2022) in Mashhad City Iran.”
A Facebook page, TNNTV Channels, with over 3,000 followers posted the video with caption, “BREAKING: No death Recorded with the Crash landed Airplane. Garuda Indonesia Flight 200 emergency landing. This can only be God.” The video garnered 337 views and 25 shares.
DID AN INDONESIAN PLANE CRASH LAND?
An online check by TheCable showed the misleading video was shared online in 2021 and has been been fact-checked by AFP.
The platform found out that the video was actually created by a YouTube user with computer-generated imagery, while it added that it is not a real incident.
TheCable also noted that the two videos were merged using editing tools.
The second part of the video was a Caspian Airlines flight which veered off the runway in Iran’s Isfahan during landing after one of the aircraft’s gears collapsed on touchdown.
The incident was said to have happened on January 6.
According to Avherald, a website that publishes aviation incidents, 5 of the 110 passengers were slightly injured when they were forced to evacuate with emergency slides.
A Caspian Airlines plane made an emergency landing on a highway between Isfahan and Tehran on Wednesday while on its way to the Iranian capital from Iraq’s Najaf city. #Iraq #Iran #airlines pic.twitter.com/QISyofFT7r
— Sinan S. Mahmoud (@sinansm) January 6, 2022

VERDICT: Findings showed that the viral videos were computer-generated and misleading.
There are no comments at the moment, do you want to add one?

I bring you all you need to know about everything that matters! I cover everything.