Over 7,000 pilgrims visited “Barfani Baba” on Day 1 of the Amarnath Yatra which commenced this year after a gap of two years. Of the 7,000, as many as 700 reached the base camp of Panchtarni in over 150 sorties by helicopters.

As per government data, the maximum number of sorties – almost 100 – were made on the Baltal route followed by Pahalgam (46).  Only, five sorties were reported via the new route from Humhama. 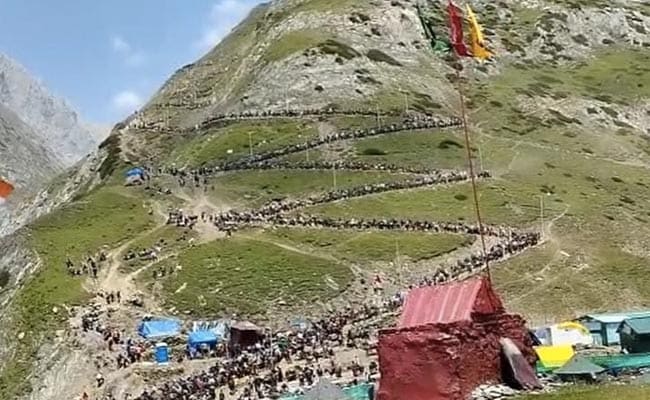 7,000 people visited the Amarnath shrine on Day 1 of the yatra

The Jammu and Kashmir administration added the new route – Humhama to Neelgarh/Pahalgam this year and have claimed that pilgrims can visit the shrine and come back the same day. “Only five sorties took place from Humhama,” a senior officer told NDTV.

According to him, choppers from Humhama land either in Neelgarh (near Baltal base camp) or Pahalgam and from there, yatris fly to Panchtarni.

Earlier, helicopter services were operational for only two sectors from Neelgarh and Pahalgam.

“Yatris can also avail this service one way,” explains an official.

The one-way tariff are:

Both Baltal and Pahalgam roads lead to the Amarnath Temple. While there is a shorter way to Amarnath Temple from Baltal, which is 15 kilometres from the sacred cave, the government has relocated the helipad to Neelgrath, giving pilgrims the option of travelling by foot, helicopter or on ponies.

The longer path from Pahalgam to Amarnath shrine, however, is around 46 kilometres and can be covered by hikes, horses, palanquins, or helicopters.

CommentsThe government expects as many as three lakh pilgrims to visit the holy shrine this year.